Very early, I was attracted to spirituality, auras, chakras, energy, health and the martial arts.  Very early I joined a group of martial arts enthusiasts in Ottawa, Canada.  This group went on to dominate the karate tournament scene for decades producing some of Canada best fighters.  I became a black belt but was not satisfied.  When the student is ready, the teacher appears.  In 1974, I met my t`ai chi teacher- mrs.  Shirly Choi and her husband, Stephen Choi.  She taught me t`ai chi and he taught me qi-gong.  During this time, I finished a BA in physical education a Bsc in Exercise Physiology from the University of Ottawa. 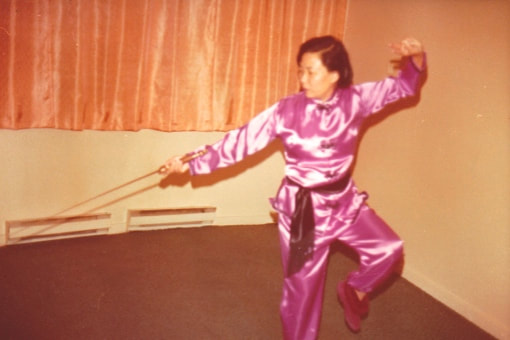 From 1975, I began seriously try to understand what all this is about.  I knew there was something else.  In the 1980`s, I discovered the answer to my spiritual yearning.  I discovered   the Teachings of the Ascended Masters through Elizabeth and Mark Prophet.  The synthesis of this with my qi-gong and t`ai chi experience has led to the Golden Pearl Conscious Flowing Method.  It is a deeply mystical method having as its aim not only to bring back health and balance to individuals but trigger in them a new zest for life- for the spiritual life.  So this method uses old chinese qi-gong exercises, classical ones ( like the five elements and wild goose qi-gong) and more important to me, those exercises inspired to me directly from the Masters. It is this blending which gives a completely new way to do qi-gong using very meditative music and great meditations.  The method is the focus and not the instructor.  So there is an ongoing refinement of this Conscious Flowing Method, going deeper and becoming more mystical as we move  from general qi-gong, to intermediate, advanced and then spiritual qi-gong.

I live in Norway today, but I have traveled to Asia, USA, Canada, Sweden to give hundreds of workshops in qi-gong and spiritual science.  I also have given hundreds of private consultations for those requiring help on their health. I am married to a beautiful spirited woman, Edith, and have three amazing children, Mikael Claus, William and Isabel. I have a son from a previous marriage who is very creative and art oriented named Patrick and he lives in Quebec with his beautiful family.  I am blessed also by having an incredible circle of dedicated friends whose friendship I valu dearly.  My mission is to touch the souls along the way and motivate, inspire and encourage them to discover for themselves the realilty of the spiritual science and reality, and in the process, get their vitaliy back....Onward and upward.